The rise of the decacorn

The rise of the decacorn

Major darlings in this new club include companies such as from Databricks, Revolut, Stripe and ByTeDance, which add to the early exceptional decacorns such as Facebook or Palantir, that by now exited the club through IPO. The club is now reaching the threshold of 100 decacorns, or a size  bigger than the original number of unicorns, when buzz emerged about them (see Figure 1 ). The Covid years have brought a strong push in new decacorns, as roughly 50% of them have appeared within the last two years. 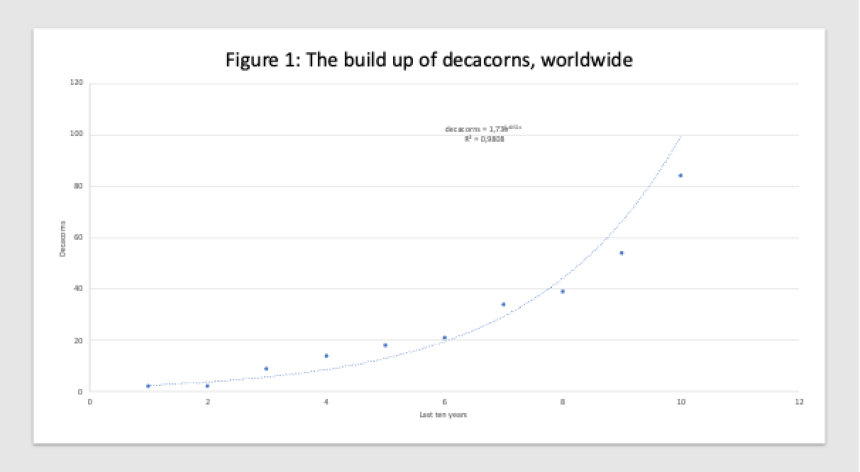 The number of decacorns grew just over 40% per year in the last ten years, or slightly below the rate of unicorns (Figure 1). If things were to hold these large rates, we might see as many as 800 decacorns by end of the decade.  This is a meaningful number, meriting a deeper dive of our own into this decacorn phenomenon, alongside other emerging - although limited - research on the subject.

5 indicators of a decacorn club

At present, there aren’t enough decacorns for the detailed and robust analytical study we’d like to do to see what makes them unique, as we did in our companion research on unicorns. Still, there are a few important indicators we can see emerging: 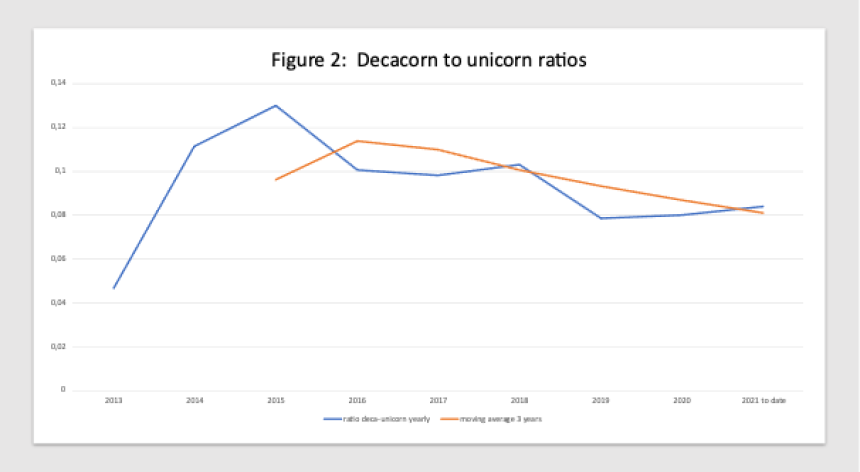 Approximately 9% of the unicorns become decacorns (Figure 2). In one way, those are better odds than start-ups valued at USD 50-100 million stand at becoming a unicorn. At the same time, though, these are rates we would expect to see, as unicorns have already demonstrated the necessary strengths to further propel them in the future.

Still, this thrust is never a done deal: if we look at the funnel of every extra billion of valuation from unicorn to decacorn (Figure 3), each extra billion has only a 65% chance to bring the next one closer to the decacorn club. Of course, this probability increases from 37% at the low side (1 to 3 billion value), to up to 80% at the closest side to decacorn ( e.g. more than 5 billion), but that means that each hurdle has a risk to never reach the decacorn club. 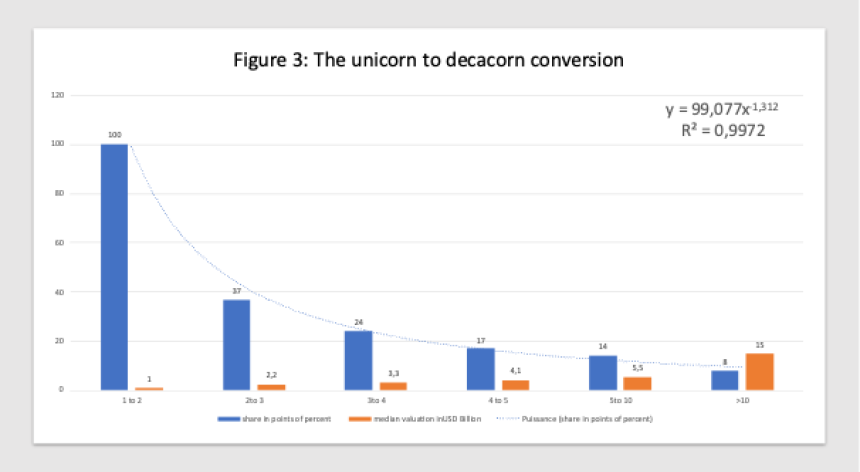 2. How do decacorns beat the odds

So how does a unicorn beat the odds to reach the unicorn status? One simplistic way is to think it is just a matter of time—decacorns are just unicorns at a 10X valuation, 10 years later. In other words, a “deca-” is just an older “uni-” corn.  But the reality is that the average unicorn is not destined to become a decacorn.

In fact, the average decacorn is 10.5 years old, versus a bit more than 7 years old for a unicorn. In numerical terms, that means that a decacorn is a 10X growth in valuation in just an extra time of only 3.5 years - which requires an annual valuation growth rate higher than 100% of the original unicorn valuation.  Very few unicorns can do that. In fact, even only a few start-ups can sustain that annual valuation growth hurdle of more than 100% to become unicorns. A decacorn is thus a start-up that can sustain that annual growth over a decade on average.

But how do decacorns sustain such a massive value growth? One key element is to go for “the world is flat”-concept. The first ever European Decacorn, Uipath, designed a global growth strategy from its onset, so that the company could cover as much of the market as possible. ByTeDance scaled globally, as a blowback from China.

Another indicator beyond this massive growth is to ensure a global appel of their products/ applications, such as Stripe for secure payments, or BioNtech for Covid vaccines. And like unicorns, decacorns tend to scale in early technologies with vast opportunities, e.g. genomics in the case of BioNtech, AI for ByTeDance, DataBricks, or Palantir, and blockchain crypto for FTX.

3. A change in capital efficiency

Decacorns also feature significant capital efficiency. While we estimate that unicorns value is at least 4x the capital invested, for more than 60-85% gross IRR, it looks like the decacorns may double that value for the capital invested. We have computed -with some assumptions- that the marginal ratio is 7.9 for the top 25 most valued decacorns to date (Figure 4). Among those top decacorns, IRR may exceed 90% at the very least, or a rate above the ones of unicorns. 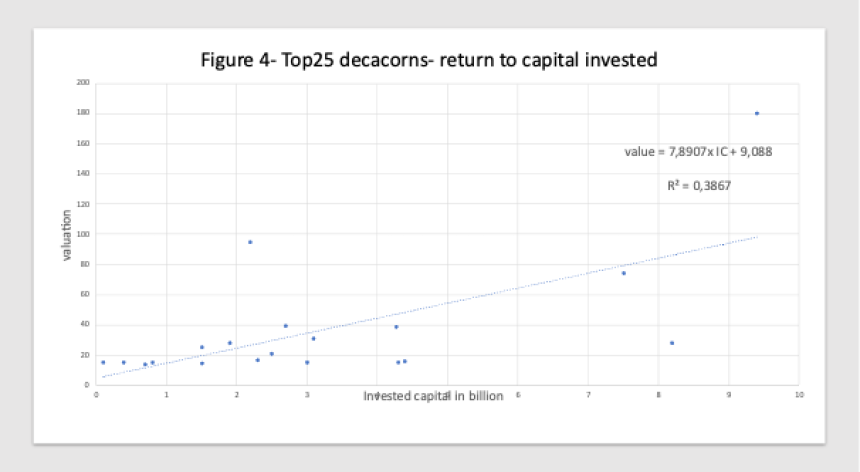 Among decacorns, IRR may seem to decrease slightly with amount of capital invested. Still, the decline in IRR is much less than proportionate, demonstrating that deploying more capital to a decacorn is rather attractive. 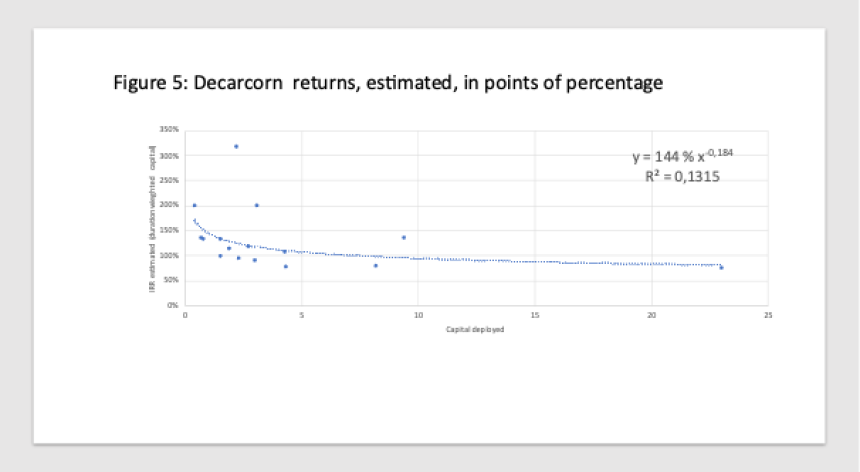 Among reasons for declining returns to capital deployed, is the fact that large decacorns operate with infrastructure-based business models, e.g. in mobility, such as Waymo or SpaceX, or in logistics, such as Lineage or F&T Express ( Figure 5). However, once their infrastructure is fully laid out, they quickly recover their returns with a faster revenue build out.

The wisdom has been that Silicon Valley has a unique ecosystem advantage in terms of tech start-ups. As time has passed, however, start-ups have prospered everywhere, withing solid tech ecosystems, and unicorns have themselves become a global phenomenon.

By current trends, decacorns are also merging from all over the world. They may even well be more diversified than unicorns, with a promising number appearing in Europe (Celonis, Klarna, Checkout, Global Switch), South-East Asia, and Australia (Canva, GotoGRoup, Lalamove). In this respect, Europe is scaling better than we thought—in fact, the ratio of decacorns to unicorns in Europe is at 13%, well above the 8% rate of the US. Europe – more specifically the UK, Germany, and Sweden – has experienced a real surge in decacorns, with more than 10 new ones in 2021 alone. 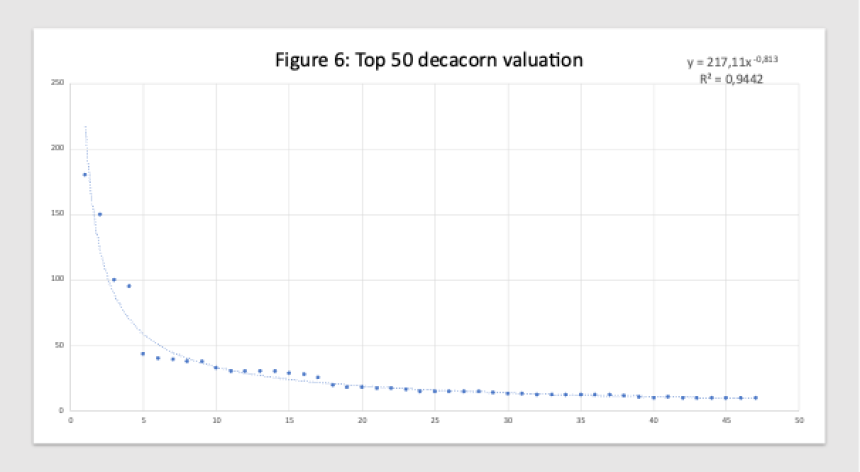 Start-up’s success can come with very high risk, but also with superstardom. Only 10% of start-ups survive long-term, but when they do, they are rather valuable businesses. 10% of those may even become a unicorn, with even more attractive IRRs. And within unicorns, we just have calculated that only about 9 % has been reaching the bar of decacorn, with possible triple digits IRRs. Figure 6 shows that a few companies, like ByTeDance, SpaceX, and Stripe are now close to reaching the next 10X valuation hurdle of USD 100 Billion.

This funnel staircase of value growth is also rather unique as it has taken place over a 15-to-20-year period, where digitalisation and “softwarisation” have been transforming our economies, while bringing faster, more scalable, and more disruptive business models, for start-ups to become multibillion value companies in count of years -and not in count of decades as seen before this tech revolution. As digitisation continues to expand with new technologies, this suggests that this pattern of x-corns will continue to expand, along which high return accruing to those daring entrepreneurs and private financiers.