When companies talk about acquisition and mergers, they might think of Volvo and Renault back in 1993, or more aggressive stories like AB InBev’s $104 billion takeover of SABMiller in 2016. “We’re not quite InBev,” says Cédric Pierrard, but judging by the recent string of acquisitions he’s led – 4 in the last 12 months – the comparison might only be relative.

As Efficy’s co-founder and CEO, Cédric has helped launch a “5³ objective” in 2019, which is to multiply the company’s size by 5x, to represent 5% of the independent CRM market in Europe, within 5 years. This is the energy behind Efficy’s swift and robust growth, although Cédric is quick to point out that the real driver is an unwavering goal to serve customers better. “It’s not just about being bigger,” he says. “We believe customers want a European CRM option, with more localised focus and support.”

Today the Efficy Group has around 13,500 customers, with more than 330,000 daily users, and an annual turnover of €66M. Their growth hasn’t always been plain sailing, but Cédric credits both the positives and the negatives for helping him develop the M&A process he’s shared with us today.

Want to build by learning from others? Sign up for our newsletter and get all the news, case studies, and insights on B2B SaaS Venture Capital in Amsterdam and beyond.

What are mergers and acquisitions (M&A)?

Generally speaking, the term M&A describes the consolidation of companies or assets through various types financial transactions, such as company mergers and management buyouts. In the end, it’s a type of partnership designed to make a company more profitable, but Cédric points out that it’s actually one of three types of partnerships, the other two being commercial agreements and business partnerships.

Commercial agreements are probably the first step in any type of partnership, though not the strongest or most committed. “There are many reasons to go this way, particularly because it's relatively cheap,” says Cédric. “It’s just a case of signing a contract. Secondly, it’s very easy to set up: you set the terms, like ‘you sell my product and I’ll give you 10 percent of the first year’s revenue’, and then you’re good to go – you’re in a partnership.”

The downside to this kind of agreement is there tends to be poor alignment, as well as little or no control over how much effort the other party puts into selling your solution.

It’s also a low revenue solution for the partner, which can also keep their motivation low. The only real exception to this might be significant, multibillion euro aircraft- or weapons-type contracts, but this doesn’t really apply to standard commercial agreements.

This involves collaborating with a company that will add value to your product or service and resell that to customers. It's a more evolved, in that the other company might even dedicate a team within their organisation to selling or supporting your solution.

As with commercial agreements, this option is attractive for being relatively cheap and fast to set up. It's also scalable, meaning you can easily go from one partner to 10, then 20, and so on.

While it’s fast to set up however, it can be slow showing results. Once again, there is little to no control over how much you can motivate your partner, especially if they are selling more than just your product. Running business partnerships can therefore take considerable effort.

This, in Cédric’s opinion, is the strongest partnership you can form with another company, as delivers complete alignment. There are various types of mergers, such as mergers of equals and friendly acquisitions.

There are three matches that Cédric considers when looking for a company to partner with: product offering, team, and reaching scale and new geographies.

This is a no-brainer: unlike a horizontal merger between two firms that sell the same product, a product offering match involves buying a company that helps you immediately upgrade your own product or functionality. Likewise, this allows you to sell your existing product to the other company’s customers, thereby increasing the value you deliver to all your customers, as well as cross-selling opportunities.

Sometimes, there is real synergy between teams. Cédric says, “Maybe you just get along well with the potential target team, or they have a team that has more expertise in sales and marketing, while your team is better at technology. Bringing the two together can make really nice match. And this is what we've done in many cases.”

A further benefit, particularly when buying a target company with a very similar product, is having more people working on the same technology stack, giving your R&D team more speed and scale.

Companies that feel they have scaled as much as they can on their own and who might, for example, feel too small within their own region can also scale by acquiring and merging with other companies. With regards to international expansion, it’s far more cost-effective to acquire abroad than to set up operations from scratch. It can also reduce the market entry risks, as the target company will already have a customer base in that country.

How to finance mergers and acquisitions?

Financing M&As is the next consideration in the process. A fascinating fact about Efficy is that it has almost never had to raise capital. “Even now,” says Cédric, “roughly 50% of our growth is organic, meaning through sales and marketing, and the other 50% coming through M&As.” This healthy revenue has allowed the company to finance its M&A strategy with their own money and bank loans.

Within his acquisition planning, the other financing options Cédric considers are:

In Cédric’s own words: “if you want to finance an M&A without fund raising, use earn-outs. You will simply never get a loan for the target company’s full price. Also, there is almost always a difference between the seller’s asking price and the amount you will want to pay. So the best way to bridge this is with carefully-designed earn-outs.”

Cédric always emphasises the necessity for well-designed earn-outs. They should be designed in such a way that, if they are met, everybody is happy and in complete alignment. Poorly designed earnouts risk misalignment between old and new shareholders.

“Cash is obviously a vital resource, especially for cash-driven companies like ours,” says Cédric. “First of all, cash generation implies that you can access bank debt (usually a multiple of your yearly cash generation). As an example, having a cash EbitDA of 10M€ gives you roughly access to 40M bank debt. On top of bank debt, some debt fund can lend you even more money (depending on how much you want to leverage the company, you could go up to 7x. In my example, it helps you get 30M on top of the 40 from banks. And of course, the cash you generate is as such available for acquisitions. Naturally, this isn’t as easy for startups.”

These are one of Cédric’s preferred sources of financing. They are particularly useful for companies with a good EBITDA (Earnings Before Interest, Taxes, Depreciation, and Amortisation). Because EBITDA is a considered a measure of a company’s overall financial performance and health, banks are willing to offer better rates to those companies with stronger scores, sometimes as low as 1% to 2% per year.

A vendor loan is where the seller lends the buyer money. This can be used to bridge the gap between the bank loan and any other necessary funds. If a company has one million in cash, for example, one million in debt, and another million in earn-outs, despite the total of three million, that company would only have to pay the one million in cash. The rest is a vendor loan, which is considered as subordinated debt.

Although vendor loans indicate friendly acquisitions and can be easier to come by, they do quite often have higher interest rates.

“Equity,” says Cédric, “is a completely different conversation. In my opinion, it's also good to discuss an equity exchange with a potential partner or target. I like it because it’s really good to get a true and fair opinion of your company’s value.”

Efficy has mainly used equity as a secondary investment rather than to finance their M&A transactions, with a relatively low capital expenditure of about €2-3M. For equity, Efficy has partnered with Fortino since 2019 and sees this partnership as vital, particularly in the credibility it gives Efficy when the company presents itself to banks and other external loan providers.

After contracts have been exchanged and the M&A has been announced, the next step in the acquisition process is to integrate the target company into the parent company.

Efficy’s Chief Operating Officer, Audrey Levin, runs this process, with the help of a dedicated integration team to ensure all of the right governance is in place. It’s also Efficy’s policy to have a company representative present throughout the integration journey, on a daily basis, to make sure there is always someone available to answer questions, see how things are going, and gauge the atmosphere.

For Audrey, integration goes beyond the organisation, but all the way down to the operating model. “We want to do it fast,” she says. “We want to do it at lightspeed.” And at the heart of this is Efficy’s four key principles to make everyone from the new company feel welcome and truly a part of the Efficy Group.

With these principles in place, the integration itself consists of four sequential phases: 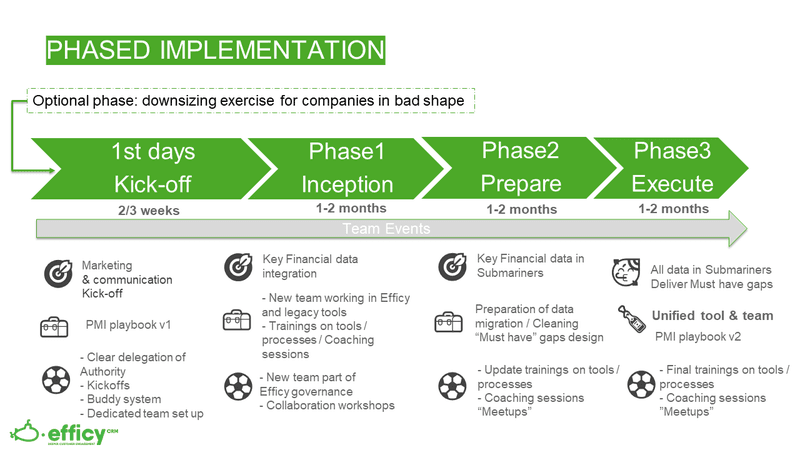 The duration of each phase – and of the process as a whole – naturally depends on the size of the acquired company, and the process has obviously been made a great deal harder in the face of the pandemic. But using a smaller company as an example, each step took roughly one month to complete, with the kick-off in mid-February, phase one starting at the beginning of March, and the process being completed in May. 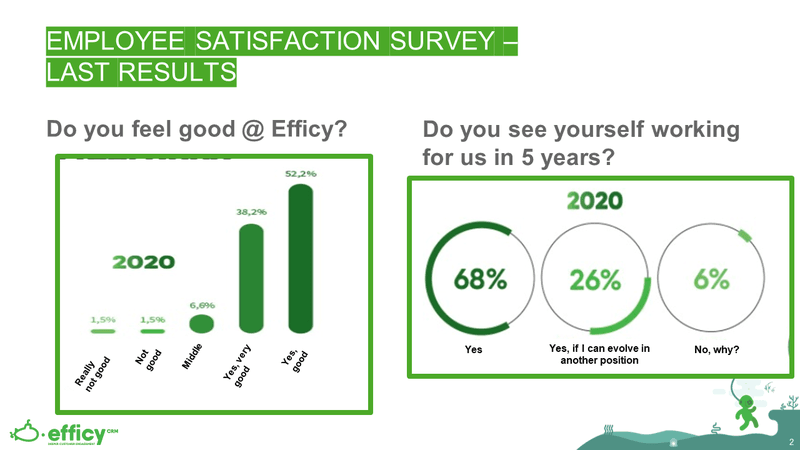 Cédric founded Efficy with his business partner, Robert Houdart, in 2005, and has, in the 11 years he’s been CEO, completed over 13 mergers and acquisitions. The path hasn’t always smooth, but Cédric is a quick learner, as well as methodical. Of course, he measures the company’s success by the strength of its overall growth – as a result of the 4 acquisitions in the last 12 months alone, Efficy has increased its revenue from €20M to €66M.

But revenue is just one measure of success. A more telling measure, Cédric feels, is the quality of the company’s relationships. With the vision of building a European answer to U.S. CRMs, Cédric is proud of the way Efficy works with its clients to develop products that meet their needs more precisely. And it is these relationships that enable the company to keep growing.

Cédric is adamant about also acknowledging the people behind the product, both the long-term employees and the new ones from acquired companies. As an expert in mergers and acquisitions, Cédric is well-aware of the impact they can have on the people. And in the same way that he relishes equity exchanges for the truth they lay out about the company, he values employee feedback surveys to measure the quality of his M&A and integration processes.

“We usually don’t do layoffs,” he says, surprisingly. “Especially if the company is in good shape: we usually work to keep everyone on board, or at least everyone who wants to. For those who leave on their own accord, I’d say that’s only between five and 10 percent.”

Put differently, there is additional, optional integration phase Efficy uses, but only in case an acquired company is in particularly bad shape. This takes place as a downsizing exercise before kick-off. It’s probably telling that Efficy has never had to implement this step.

If you’re a Europe-based B2B SaaS company looking for advice and potential investment, we can help. Get in touch and let’s get the conversation started.