To stay competitive, VCs have to keep innovating.

To stay competitive, VCs have to keep innovating.

5 insights on how to play it smart based on Atomico’s European Tech Report.

Among the wealth of information, Atomico European Tech Report 2021 demonstrates that the European tech scene has been soaring, passing the bar of USD 100 billion in investments before the end of 2021. That is 10 times the amount of money poured into European tech by 2015. At the same time, value has grown to reach USD 3 trillion, with the private portion being worth more than USD 1 trillion. Close to half of this value has arisen from 223 European unicorns and 26 decacorns, financed in most part by VCs, with attractive returns.

The flip side of this success is that VC competition has also been heating up for European VCs. This competition is felt every day, while 40% more American VCs have flocked to the continent, with the number of finance players broadening by more than 25% by 2021.

How then should a VC compete and differentiate in this exciting but highly crowded environment? We have decided to use Atomico’s data to uncover five insights on the more appropriate strategic plays.

How to play it smart: 5 insights

1. Saas B2B-AI is one of the best strategic archetypes

A typical question for a VC is whether it should have generalist funds or more specialised, and, if so, where to focus them.

Some sectors, like banking, often play the “generalist game” (universal banking) given economies of scope and scale, with a minority going for a focused strategy, specialising in investment banking, for example, or private banking. 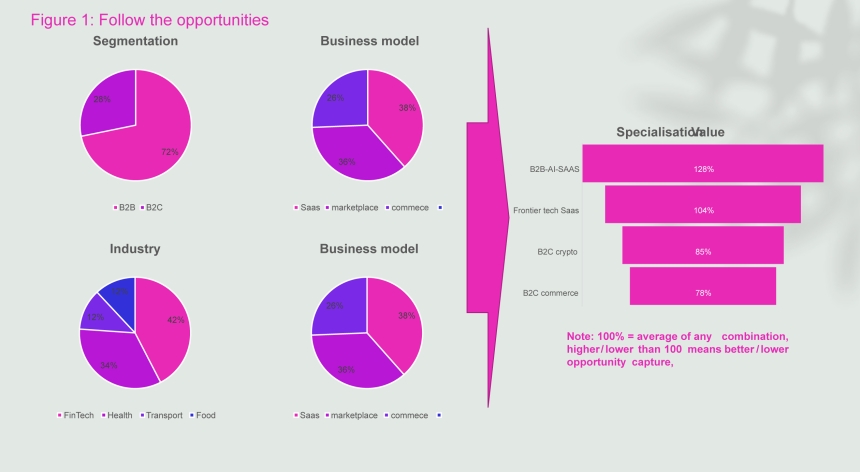 Economies of scope/scale may be less relevant for VCs. The balance may come to either grabbing a growing land of opportunities that will provide enough returns anyway or selectively focus where the best opportunities for return are in play.

A seminal example of the first strategic position is the Tiger Management’s strategy. Deploying capital quickly and broadly may indeed work if one believes that high-tech disruption is only beginning, with many unicorns still to be minted. The Atomico report suggests that the tipping point for high-tech is now, and that a broad base strategy may pay off nicely.

Still, this requires broad capabilities and funds to cover all European markets. Even if digital disruption may bring great returns, however, many digital native companies have struggled to scale and the failure rate for digital start-ups is not that different to traditional businesses. Finally, returns in digital may be significantly different between old and new frontier digital technologies, for example, or among business models, all while new opportunities may be emerging (NFT and crypto, in the context of blockchain rollout).

We have looked at Atomico’s data and further took a random list of funds to see how they position themselves, assuming that this will give us an idea of where the opportunities lie (Figure 1). The first observation is that generalist tech funds are not the rule in Europe, with more than two thirds of them taking a special focus. Looking at four typical specialisation themes (segments, sectors, business models, and technologies), we can see a rather large set of archetypes. However, the B2B SaaS-AI archetype has been twice as prevalent in terms of funds collected, as opposed to a B2C commerce specialisation, for example, and 50% more prevalent than a fund with no spike in those themes.  At Fortino we focus on B2B SaaS. This cluster shifts more towards frontier tech and AI.

2. New themes are emerging, but sustainability awaits its own funding

Atomico comments on a few crucial upcoming themes which are of interest to both entrepreneurs and LPs. Specifically, sustainability is becoming increasingly important, followed by frontier tech, Defi/crypto and Web 3.0, then health systems, and future of food.

We have seen those trends and are investing in them: frontier Tech such as digital twins, AI, DeFI and sustainability.

Still, there are some clear observations when playing with the data: 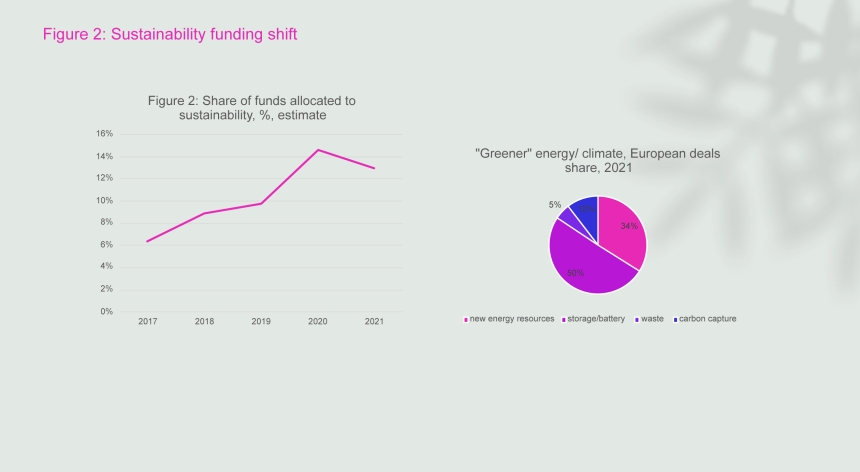 Our final observation is that sustainability is not only about green energy batteries, etc. – it can come from a marriage with deep tech. Frontier technologies, and notoriously AI, are especially likely to help drive decarbonization, to boost a circular economy, and to secure dematerialization, while also playing their part towards energy efficiency at a much faster rate than would be possible without them.

3. The rise of early funnel play

Besides the generalist/specialist question, another strategic question for European VCs is whether VC should attempt to move much earlier in the venture funnel. Within the later stages of the funnel, deals are both bigger and less risky. Still, competition may be intense, with Atomico rightfully documenting the growing hands of US-based VCs in those deals.

While risky, investing early comes with the benefit of spotting promising companies before others, both with minimal capital play and a chance to follow it through multiple rounds. Atomico reports that pre-emption tactics are indeed a fact of life. It already happens early in the funnel – 22% of time for early Seed – and becomes the dominant rule at the later stages for major scale-ups.

Using a typical funnel of success rate and funding per stage from CB insights, together with average years between rounds of financing, we have tried to see whether pre-emptive rates are a good proxy for the probability of excess returns. In effect, our regression analysis suggests that VCs might have cause to pre-empt in deals with at least 15% IRR.

Thus, using Atomico’s reported pre-emption rate as the likelihood of a good deal, Figure 3 calculates the option value of deal continuity along the funnel. Not surprisingly, the simulation suggests that the absolute benefit grows exponentially to higher stages (the stage-elasticity of a good deal is estimated at 1.2). Still, the relative benefit is also at its highest at the start of the funnel, where investors can compensate for the higher risk of failure through detailed due diligence, and where deals will scale better with lower sunk capital deployment (stage-elasticity is estimated at -0.3). 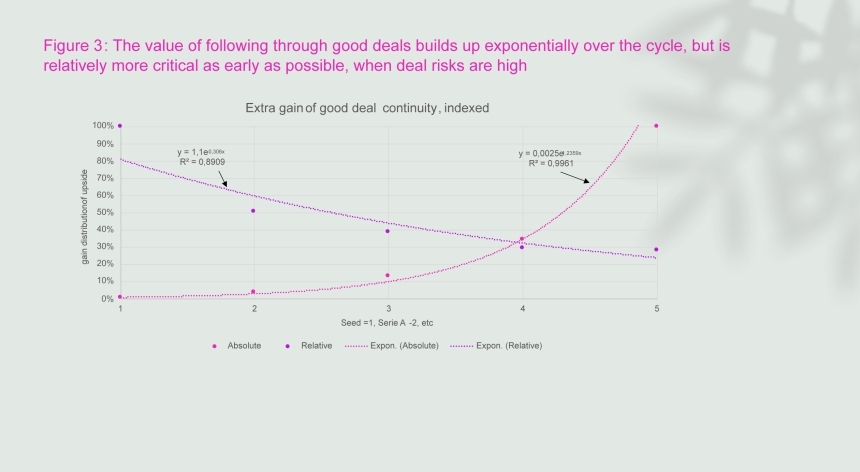 We have intuitively understood these calculations and have recently launched a second VC fund, recognising that we need to get in rather early to secure this value of deal continuity. The risk is worth the price, if indeed the European market is scaling significantly, but also because the market inevitably attracts more heated competition.

4. How to be a good VC orchestrator: Dense network and insights capability play

The VC business model can be described as a platform where, on the one side, entrepreneurs supply innovations while, on the other, LPs are looking to invest for returns. In this case, the best platforms are those on which the two parties are aligned, favouring good pairing, and where both parties are happy to invest (the LPs) and redeem shares of the company (the entrepreneurs).

Looking at entrepreneur and LP response surveys, the picture that emerges is of limited surprise – that is: both LPs and entrepreneurs love VC with large networks.

But the good surprise is that the network does not systematically favour large, global funds. In fact, networks may generate closer ties when they are local, and factors such as strategic and operational insight may become crucial to win over deals.

Our network is expanding, and we have taken part in deals as co-investors. Furthermore, our team includes hands-on experience, with a mix of VC professionals with unicorn experience, former attacker company executives, and market and strategic consultancy experience. This mix of background and experience results in a well-rounded set-up to support founders in unlocking the full potential of their businesses.

5. The world is not that flat

European VC may be better described as a large network with many nodes, represented by local ecosystems. Atomico demonstrates the big differences between cities in Europe, such as Stockholm, Amsterdam, or Munich.

Considering a local system prevails if it is able to generate more than 1 unicorn (each standing for 0.1% of start-up success over a decade), one can calculate that a density of 1 million inhabitants may be enough to generate an ecosystem. As 1.5% of Europe’s active population are entrepreneurs, one million inhabitants should lead to a potential of 2.2 unicorns per city.

We spend a lot of time connecting and contributing to the local ecosystems in Berlin, Amsterdam, Paris, Antwerp, and Brussels. The first three of these hold all of the ingredients required to flourish. In particular, they have strong universities and extensive networks of angel and VC investors, which are the required minimums to foster and host unicorns. And indeed, these cities already have proven themselves as breeding grounds for the next generation of entrepreneurs, while being great places for people to live.

And while the last two cities – both in Belgium – are somewhat less mature to date, we have begun to expand there and started to see evidence of local hubs, with success stories like Collibra and Deliverect.