When founders and executives think about branding, what usually comes to mind is the company’s logo and maybe the colours on the website. This may be because the term itself still harks back to the old practice of literally burning a symbol onto one’s property to indicate ownership.

In a much broader and more modern sense, however, branding has come to signify a company’s public-facing identity, involving elements from the website’s “look-and-feel” to the company’s Tone of Voice, the product packaging, and even the workplace culture and more. In other words, branding is the impression an audience forms of a company – the first element of the so-called “customer experience”.

And while executives have started putting greater focus on customer experience, branding itself remains largely distrusted – or maybe just neglected, given its less tangible nature in the face of more measurable sustainability and performance priorities.

In early 2021, when Jochen Vanpoeyer started at Mobilexpense, he joined a company deeply engrossed in its growth efforts. In the last two years, for example, the company had acquired three new companies, to include Declaree in 2019 and Expense.se in 2020, both of which were serving different market segments. As any new CMO, Jochen immediately explored the best way for marketing to contribute, and his eye quickly fell on the company’s branding.

Mobilexpense provides a cloud-based expense management solution to help Finance and HR departments work more effectively and improve workforce well-being. Among their customers, they count some huge, household names such as KLM, Canon, and ABInBev.

Despite these indications of strength, Jochen found that the company lacked brand awareness. This was particularly apparent in their lead generation efforts, where, to his mind, a 21-year-old company with such firm standing should be more involved in demand generation instead – in other words generating attention to the need for the product as opposed to generating actual leads.

Jochen wondered whether this had to do with the company’s perception of itself as more of a start-up, a mindset he saw reflected in the website’s “look-and-feel”: heavily features-driven, typical of SaaS products, but also a dead giveaway that they might not fully understand their audience.

At the same time, Jochen discovered an operational divide, particularly between Mobilexpense and Declaree, the company they had acquired 2 years earlier. Declaree represented the mobile app capability of the product and, by virtue of its importance, stood on almost equal footing with Mobilexpense. From where Jochen sat, it felt like managing two separate teams, with two brands under one roof, essentially removing any quick or obvious solutions.

Given the apparent impasse, Jochen decided that the most logical first step would be to focus on fixing the basics. To him, this meant bringing the company under a single brand.

McKinsey, as it so happens, discusses the importance of marketing integration within the M&A process, pointing out that “marketing should lead the organization in developing fresh, compelling value propositions and setting the new organization’s brand strategy.”

The impact this integration can have on a company’s revenue speaks for itself: 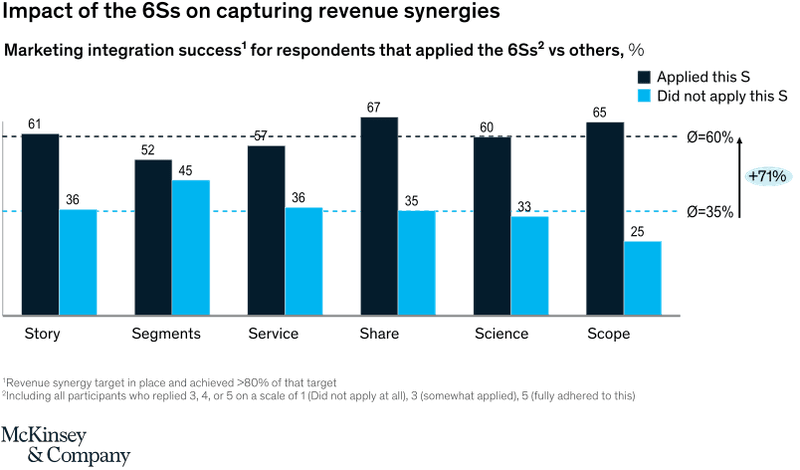 But Jochen’s decision to integrate the brands raised two immediate questions: was it even realistic to combine the two brands, and would it be better to just go with a brand refresh instead of a complete rebranding?

To reach an answer, Jochen and his team paired up with Leap Forward for a series of design and identity workshops with the management team. The point, again, was to have a number of options to consider, and, to begin with, they chose to limit those options to just the logo.

Most CMOs value decisiveness. And anyone who has ever been involved in the branding process knows how chaotic it can be to involve too many people, especially internally. Jochen, on the other hand, chose to put these two questions to the company as a whole. The response, to his surprise, was overwhelming, with roughly 70% support for combining the two companies through a complete rebrand.

The design the company chose (by majority vote) was a logo that brought together the orange from Declaree’s logo with the capitalised “X” in the old version of Mobilexpense’s logo:

Jochen and the rest of the management team were naturally pleased with the company’s degree of involvement. However, beyond the clear and very promising signal that everyone wanted a fresh start, the underlying message Jochen saw was a company-wide desire for alignment under a single identity.

The third pillar to Jochen’s rebrand strategy was to change the company’s message. After 21 years, he wanted to say, Mobilexpense was more than just a tool – it was a group of domain experts who understood its audience’s needs and challenges and sought to help solve them.

Brand strategists often point to loyalty and trust as one of the fundamental functions of branding. This goes back to the adage that “People don’t buy products, they buy brands” and comes as a result of a company demonstrating more than just its value proposition, but its true understanding of its audience. This, the experts would say, is messaging.

There are, of course, many ways to communicate this messaging, but Jochen and his team were intent on using storytelling. More specifically, the storytelling needed to do two things: to first bring out the product’s benefits and values through a much more human message, and second, to make it clear that this value came from a single, unified brand.

The real-life benefits of good branding

To complete the rebranding project, Jochen therefore followed the three steps of internal discovery and workshops, the visual rebranding, and the use of storytelling. These were, again, the very basics, as the project needed to be completed quickly, and so that, now, his team can start focusing on demand generation.

It also bears mentioning that the project didn’t go without its setbacks. In fact, if Jochen has any advice ahead of a branding or rebrand, it would be to make sure people start with the content – contrary to his own advice, Jochen began with the visual layout and quickly discovered how difficult it was to then get the content – and new messaging – to fit.

There is, however, both quantitative and qualitative evidence of the rebranding’s success. As suggested by McKinsey’s research, Mobilexpense has already seen an increase in its business performance, in terms of:

They have also seen increased traction in their target regions, and will continue to monitor more metrics as the rebrand becomes more established. And, with a defined storyline, the team will soon begin working Expense.se – which has a dominant position in the Swedish market with small- to mid-sized customers – into the fold.

In the meantime, Fortino – Mobilexpense’s investors – now routinely connect Jochen with other CMOs within their community to share his expertise across their portfolio, several of whom have seen equal success in their rebranding. But if there is just one pivotal success Jochen sees in the project, it is the new sense of unity within the company.

To truly illustrate this sense of community, Jochen points to the company’s recent decision to move into its own offices. After several years in a shared office building, the pandemic forced the choice between finding new shared offices or to find a location Mobilexpense could call its own. And, with yet another overwhelming response rate, the company wanted its own space, with their own colours, and that truly displayed their identity and values.

Those values, Jochen says, were already there – now they just had a brand to reflect them.